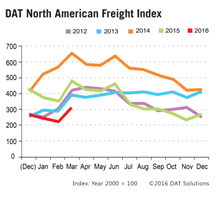 A 51 percent decline in the fuel surcharge, which typically comprises a significant portion of the total rate intermediaries pay carriers contributed to a decline in all-in rates for all equipment types. All-in rates for vans were down 21 percent, reefers declined by 17 percent, and flatbeds were off 16 percent. The surcharge is pegged to the retail cost of diesel fuel.