PORTLAND, Ore., — Truckload freight availability climbed 12 percent last month, compared to September 2015, as the number of loads on the spot market surpassed same-month levels from the previous year for the second consecutrive month. In August, the spot market enjoyed the first year-over-year increase since December 2014, according to the DAT North American Freight Index. 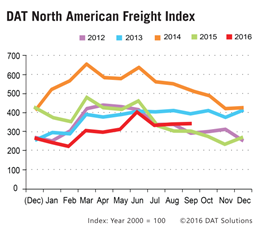 Dry van and refrigerated (“reefer”) van freight increased by 33 percent and 27 percent, respectively, but flatbed freight volume slipped 13 percent compared to September 2015. Flatbed volume has declined on a year-over-year basis for the past 15 months, due to a downturn in economic sectors, such as oil and gas, that produce flatbed freight.

Month-over-month, spot market freight volume edged up 0.6 percent to the second-highest level this year. This is an atypical seasonal pattern; September volume declined month over month in eight of the previous ten years. A 2.7 percent increase in van freight volume was responsible for the month-over-month growth, as reefer volume dipped 1.1 percent, and flatbeds lost 1.9 percent in September, compared to August.

On a year-over-year basis, the average line haul rate fell 6.0 percent for vans, 4.5 percent for reefers, and 7.8 percent for flatbeds, compared to September 2015. The average fuel surcharge, a component of the total rate paid to carriers, fell 9.1 percent year over year, deepening the decline in carriers’ total revenue per mile. The surcharge is pegged to the retail price of diesel fuel.