Portland, Ore. – Following an established seasonal pattern, spot market freight volume declined 15 percent in November, month over month, largely due to a drop in demand for flatbed trucks. Freight volume has declined in November in every year except 2012 according to the DAT North American Freight Index, which has recorded monthly spot market freight levels since 1997. 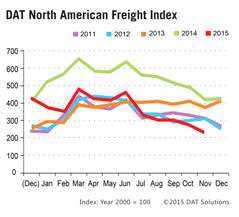 Overall freight availability slid 45 percent compared to record demand of November 2014. Although November volume was lower than same-month levels of the past five years, strong volume from the first half of this year boosted volume for the year to-date. That total was higher than the comparable period in any year prior to 2013.

By equipment type, van demand was down 43 percent, flatbed volume fell 53 percent, and reefer freight availability lost 41 percent, compared to November 2014. Line haul rates declined 8.6 percent for vans, 7.2 percent for flatbeds, and 11 percent for reefers, year over year. Total rates paid to the carrier declined by 17 percent, however, due to a 49 percent decline in the fuel surcharge, which comprises a portion of the rate.

Intermediaries and carriers across North America listed more than 120 million loads and trucks last year on the DAT Network of load boards. As a result of this high volume, the DAT Freight Index is representative of the ups and downs in North American spot market freight movement.