Spot market freight volume declined seasonally in January, down 11 percent from an atypical December high, according to the DAT Spot Market Freight Index. Compared to January 2014, volume slipped 27 percent from extraordinary demand during last winter’s Polar Vortex. This was the first year-over-year decline on the Index in nineteen months. 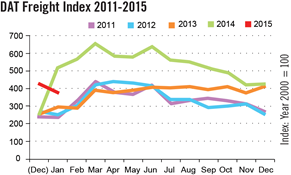 Compared to the extraordinary market conditions of January 2014, freight volume by equipment type declined 27 percent for vans, 35 percent for flatbeds and 0.7 percent for reefers last month. Rates trended up, however: Van rates added 15 percent, flatbeds were up 7.9 percent, and reefer rates rose 3.8 percent, year over year. Monthly average van rates have increased year over year for 19 consecutive months, while flatbed and reefer rates have trended up every month since the end of 2013.

Beginning with this month, the DAT Index has been re-based, so that 100 on the Index represents the average monthly volume in the year 2000.

Reference rates are derived from DAT RateView. Rates are cited for line haul only, excluding fuel surcharges, which declined on both a month-over-month and year-over-year basis. The monthly DAT North American Freight Index reflects spot market freight availability on the DAT Network of load boards in the United States and Canada. Additional trends and analysis are available at DAT Trendlines.