It looks like we’ll have to wait a little longer for a spring surge. The spot market appeared heading for a rebound early in March, but a number of unexpected events have kept rates in check. Flooding in the Midwest closed roads and rail lines, which will impact freight markets for weeks to come. There was also a major tank fire in Houston last week, which added further disruption.

The reefer segment is showing signs of life in California and in the border area of Nogales, AZ. The flatbed segment is the strongest of the three, with solid demand and load-to-truck ratios that have climbed over the past few weeks. 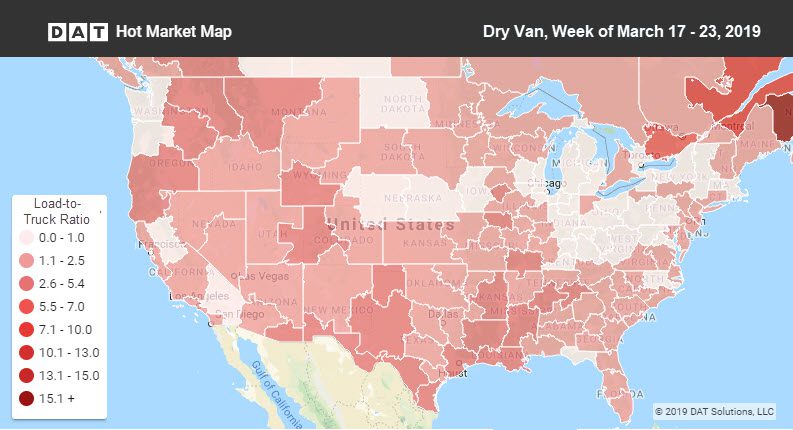 We may need to wait for April for real spring freight to hit. On the top 100 van lanes last week, rates increased on only 35 lanes, while 54 were down and 11 were neutral. But despite all the bad news about weather and other disasters, freight volumes are actually up year-over-year.

Freight volumes were higher coming out of both Los Angeles and Atlanta, but it wasn’t enough to boost rates. Still it’s a hopeful sign that things are moving toward normality.

The Columbus and Chicago markets have both been big losers during March, a month which normally sees the Midwest come back to life. Seattle has been a more active market but rates are now trending down, even as Los Angeles starts to stabilize.

California is emerging as a bright spot in spot market freight, as volume is building in the Golden State’s agricultural markets. A 23% increase in loads moved out of Fresno was led by a surge of freight on the lane from there to Seattle, coupled with a 17-cent boost to the average rate per mile. Load-to-truck ratios stayed low for reefer freight last week, despite an increase in volume out of California and Arizona. That lone dark spot on the U.S. map is Green River, Wyoming, where a few dozen load posts overwhelmed an even smaller number of truck posts.

Freight volume also rose sharply out of Nogales, AZ, with a 3-cent average rate increase on major outbound lanes. And in the Midwest, Grand Rapids is starting to pick up, likely thanks to egg shipments in the run-up to Easter. Also some lanes are showing signs of life out of Green Bay.

Slipping markets included Lakeland, FL, where both volumes and rate tumbled. Rates were also lower out of Twin Falls, ID, and McAllen, TX.