Despite an increase in freight volumes, national average rates slipped again last week for vans and reefers. Even the arrival of produce season in several southern markets wasn’t enough to boost national averages.

Weather was a factor, with snowstorms affecting a large swath of the country’s mid-section last week, from Colorado to the Upper Midwest and beyond. We’re also seeing the effects of extra capacity from the record numbers of tractors and trailers ordered last fall. 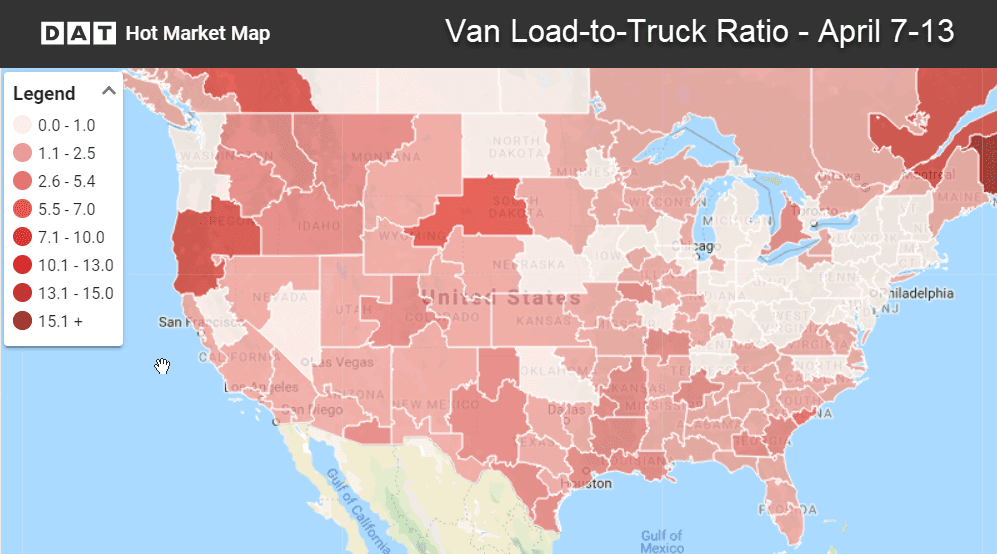 Load counts rose nearly 5% in Chicago and Houston, and more than 3% in the number one van market, Los Angeles. But the news wasn’t all good for volumes. The snowstorm that hit Denver caused volumes to plunge there. Out East, Philadelphia also experience bad weather and saw load counts decline steeply. In the top 100 van lanes last week, prices rose in only 23 lanes, while rates fell on 76 lanes and 1 stayed neutral.

Big advances in Florida and modest gains in California were wiped out by losses in volumes from the Upper Midwest and Texas. The end result was that the national rate average slipped, even as spring produce season is picking up. On the top 72 reefer lanes last week, slightly more lanes saw rising prices vs. falling prices, with 38 up, 31 down, and 3 neutral. Demand for reefers is likely to increase this week as Easter approaches.

The load-to-truck ratio in the Miami market grew steadily last week, and hit 26.7 on Saturday. The average load-to-truck ratio for the week was 8.6, with 1,825 load posts on DAT load boards and only 211 truck posts. See how you can view similar maps and graphs using DAT’s Hot Market Maps.

Freight volumes were up more than 20% in the Lakeland, Florida market, as well as in Sacramento and Fresno, California.

The Ontario, CA market has been underperforming for this time of year, and last week both volumes and rates fell.